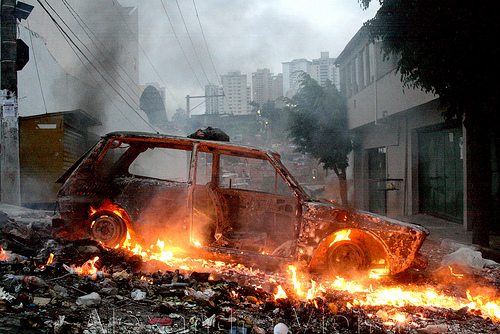 *Warning* This article covers topics such as terrorism, crime, and trafficking. This article includes content and images of a graphic nature that may upset people.

There are many dangerous places in the world, but there are also some very adventurous people out there. If you want the ultimate in adventure tourism, one of these 20 most dangerous places in the world might just the thing to give you a constant rush of adrenaline if not abject fear and terror. Some places are dangerous because of their location, because of things like recent earthquakes, and because of general lawlessness. Of course, anywhere that is in a war zone is also pretty dangerous for obvious reasons.

A warning from the U.S. Department of State about travel to a given location is also a good warning sign that this is not a safe place to go. There are some places so dangerous you cannot even get there from the United States, but if you are determined, you can go somewhere else and get there another way.

While some places are war zones, or nearly, there are some otherwise nice civilized cities that are dangerous because of the crime rate. In some cities there is a danger of getting robbed, raped or murdered, but more from the regular criminal element. Some of these cities are in the United States. There are other places that are dangerous naturally, which is what most adventure seekers want. With all that in mind, here is our list of the world’s 20 most dangerous places. Be warned, there are some graphic images.

This is a city that would be worth visiting but it is very dangerous. It is one of the world’s oldest continually inhabited cities, and is said to have been founded by one of Noah’s sons (Noah of Ark fame). The U.S. Dept of State says do not go there, and its very hard to get a tourist visa. You have to get one from a travel agent inside the country. The problem here is general unrest, lawlessness and terrorism.

There is a high chance you could be kidnapped and beheaded by terrorists. On the plus side, your head might end up on the national news. On the flip side, a foreigner there, found in the wrong place, could be charged with terrorism and jailed indefinitely by the police. There is just no safe place to be here.

Bogota is known for its culture, museums, art and food. It is one of the largest capitals in South America, and the highest at more than 8,000 feet above sea level. Columbia has been known as a haven for the drug, cartels for years. That may have faded somewhat, and there are no official warnings about not traveling there.

However, drug cartel and violent gangs are still around. There is also a lot of thievery and robbery that happens even on the main highways. The police may or may not help you. The danger here is mostly in getting robbed or having personal items stolen.

This is another city that is beautiful, and has great countryside all around it. The problem here is one of crime. It has by far the highest crime rate in the country. You are very likely to be robbed here, and if you resist, you will likely be hurt or killed. Cape Town is relatively safe in the tourist areas during the day.

However, the city has a reputation for having people who have made an art of getting your bank information from an ATM you have just visited. Pickpockets are the greatest danger, as well as general thefts when property is not secured. It has a reputation as one of the highest crime areas in all of Africa.

It’s very probable you won’t be robbed at this next dangerous location, but it is one of the most dangerous places because of its natural terrain. This area in northern Ethiopia covers 100,000 square kilometers. It is a low lying area shaped by flow from active volcanoes. Temperatures during the day are often around 120 degrees, and there is very little water. There are no roads, but there are some trails used by the Afar people who inhabit the area.

They are nomadic salt miners and there are few of them. There are active volcanoes here, and a few small lakes made from dams created when volcanoes erupted. It has been called Hell on Earth because of its heat and lava flows. The colors of the hardened lava are amazing, and might be worth the trip.

Naples is a beautiful coastal city in Italy that is hundreds of years old, and a great place to explore. It is also a great place to lose your money. You will not likely be kidnapped or shot by terrorists, but your property is at risk. There is organized crime here, and some criminals have this down to an art. Motorcycle gangs are known to steal from cars in traffic.

There are murders here with the organized crime, and it has a reputation as being a gritty place. While bad things do happen, most of it is outside the tourist areas. Still, a tourist should be careful as property crime is common.

This is a war zone. The U.S. Dept of State says do not go there except for essential travel. We are not sure what essential travel is, but it is a dangerous place all the same. There is terrorism and armies fighting each other daily. An American or European would be a target of terrorists. Bombs are going off, set by terrorists.

There are also bombs around that have not gone off, and other explosives set to go off when tripped. So if you don’t get killed by a terrorist weapon, or by the government, a random bomb might just do the trick. The danger here is the war itself the continues, and terrorism is part of that.

Why is a U.S. city on the list of the world’s most dangerous places? Because of the crime rate. Forbes Magazine listed it as the No. 7 most dangerous city in America for 2016. According to the stats, there were 1,417 violent crimes per 100,000 people. The rate was down slightly from the previous year, but the city still ranks in the top 15 for the most violent crimes committed, except for rape.

Another list had Baltimore as the second most dangerous place in the state, so maybe it has to do with the part of the county. Just don’t go out at night and make sure your property is secure.

Santo Domingo is one of the oldest cities in the Caribbean, and the capital of the Dominican Republic. The center of the old town has its original cobblestone streets, set against a modern skyline. The dangers here, as in most major cities, is being robbed. Resisting being robbed can often result in a violent crime, even murder.

Avoid being out at night, or alone, as American tourists are targeted. Robbery from a motorcycle is common here. Crime is rampant and there are few police around, and there is corruption there as well.

The danger here is not from terrorist or petty criminals. The danger here is heights. The headwall is a natural formation of rock that is irresistible to climbers and adventurers. The trail up is an adventure there are few guardrails or other barriers to keep you from falling. There is only one trail up, and some of that requires climbing gear and expertise.

You must cross a field of huge boulders as well. There is a lot of snow and ice here, and ice climbing is also popular. Its a great adventure, but a miss step could leave you falling hundreds of feet to the valley below.

This area borders on the Sahara desert, and has many hot desolate places. Its easy to get lost in all that sand and heat, and there is not much water. Terrorism is also a concern, and there are thousands of Libyan refugees crossing the border from the south.

It is dangerous because of the heat of the desert as well as from the threat of terrorism and general instability of the area. There is little, if any, law enforcement around to help if there are problems.

The city has gone into decline as industry has moved out of the rust belt. Property crimes are rampant, and there is a lot of violent crime too. Forbes magazine calls it the most dangerous city in America, with 2,137 violent crimes per 100,000 people.

There is a lot of gang violence as well. The crime rate there is five times the national average. Chances are good you will be a crime victim there.

Guatemala has a lot of jungle and not much infrastructure. If you get lost out there, you are on your own. There is also a lot of drug traffic going on, so if the jungle does not get you, a drug gang just might.

It is dangerous from a natural and crime standpoints. Gangs also terrorize country roads and rural areas.

Istanbul itself may not be so bad, but it is not far from Syria and Iraq where war rages. There is a lot of terrorist activity in the area, so there is a danger of terrorism or even being kidnapped by terrorists.

There are often explosions in the area caused by terrorists.

This is a lovely port city, but also a gateway for drug traffic. There are 78 murders per 100,000 people, and almost all drug related. Because the city is surrounded by the dense amazonian jungle, it makes it easy to smuggle drugs where they are then smuggled all over Brazil and around the world.

Gang activity is also rampant and very little police protection. Cattle barons hire professional assaians to take out activists who are trying to protect the Amazon rainforests, and farmers who refuse to give into extortion an strong arm tactics. Another danger here is falling coconuts from trees, that damage cars and can kill people even in the downtown area.

Rival drug gangs make this city 100 miles from the U.S. border unsafe. Drug related violence is common, and kidnapping happens at times as well. There were 82 murders here per 100,000 in 2015.

The city is on many of the most dangerous places in Mexico lists and there is a lot of property crime. Police are known to be corrupt.

Well over 100,000 people have died in these type events here over the past 15 years. This place is beautiful, but dangerous naturally.

This border city with the United States is dangerous because of the drug trade, which often results in violence. There is also a lot of crime involved with people crossing the border illegally.

This was once a thriving tourist mecca, and now it is a center for the drug trade.

It has 128 murders per 100,000 people yearly, in addition to robberies and assaults.

This coastal city averages 98 murders per 100,000 per year, and there is little organized law enforcement.

There is a lot of police corruption, and a high rate of burglaries.

The drug trade is rampant here and violence accompanies. There are about 100 murders here per 100,000, and most of that is directly related to gang related incidence.

Ninety percent of the victims are men.