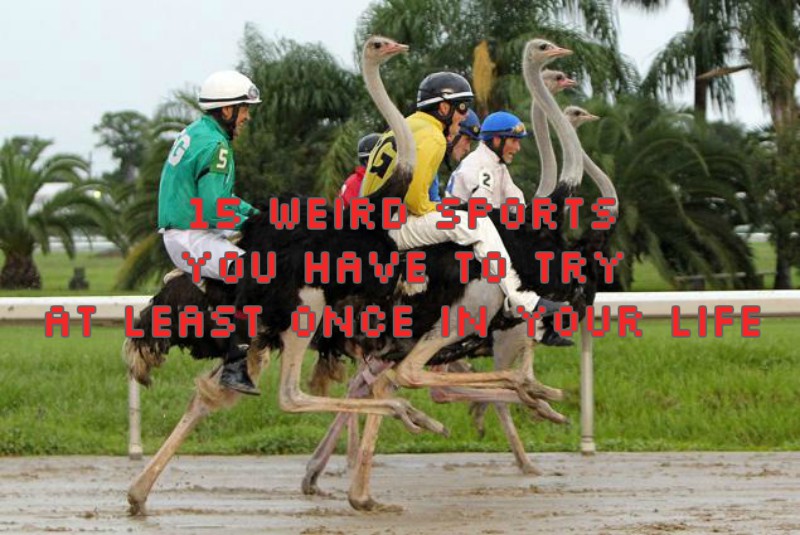 We have all heard of basketball, football, soccer, baseball, wrestling, and boxing. These sports are huge across the entire globe and has always both united and divided people. Only two other things in life can do that: religion and politics. Humans are such sports fanatics. Perhaps it’s the adrenaline of competing for a trophy, or for sideline fans, the satisfaction of cheering your team to victory. Sports are such a big deal that it has spawned an extremely successful sports merchandise industry, which rakes in billions of dollars every year. However, there are still so many other sports that haven’t been receiving as much fanfare and recognition as the ones mentioned above. Fine, they may tip a little on the weird scale, but hey, you can’t say these aren’t worth a try!

How many games involving a pumpkin can people make? Apparently, more than one – the hugely popular pumpkin carving contest around Halloween and the less known giant pumpkin regatta. Unknown to many people, pumpkins can grow so big that it can be made into a transportation vessel. In a giant pumpkin regatta, pumpkins as heavy as 800 pounds are hollowed out and transformed into an odd-looking kayak by participants. Oregon holds an annual giant pumpkin regatta, so that should let you know how big of a deal this sport actually is.

Sure, we have all, at one  point or another, played thumb wrestling to survive episodes of boredom, but in Germany, finger wrestling is a much bigger deal than that. The sport is more than 60 years old and is celebrated in the annual, highly-anticipated Finger Wrestling Championship. This game involves threading fingers into a leather band and pulling as hard as humanly possibly to defeat the opponent while garbed in traditional Bavarian wear.

Marathons have become so commonplace these days that almost anyone can join. You know what is not at all commonplace? A man vs. horse marathon, that’s what. In the small town of Llanwrtyd Wells in Britain, a Man vs. Horse Marathon has become an annual event since 1980. In this sport, racers compete against horseriders on a 22-mile course that includes bogs and rivers.

Ostrich racing, though seemingly strange, is actually one of the rather popular sports in the weird category. Ostrich racing events are frequently held in different places in South Africa and in some states in America such as Florida and Arizona. This sport is played a lot like horse racing, but anyone who has ever participated in both would tell you that it is much harder to race on this flightless bird.

People have been losing their marbles over this tournament since the late 1500s. It started out as a gentleman’s game to determine who was worthy of a fair maiden’s hand. Over time, the prize has evolved and variations of the game have been made. A popular version of the game involves shooting marbles into a hole with just a flick of the fingers.

Cycle ball is a sport that originated in Germany in 1929 and has become widely popular in many countries such as Japan, Sweden, Russia, Denmark, and France. It combines four sports – cycling, basketball, soccer, and hockey – in one exciting, and possibly confusing, sport.

Wife carrying traces its roots to Finland where a man’s physical strength is challenged as he completes a 253.5-meter course while carrying his wife on his back – all for the coveted reward: beer that matches the weight of his wife. Tales of how this quaint sport originated vary from mouth to mouth but one of the more interesting ones is that from the ancient times of a man named Herrko Rosvo-Ronkainen who was accused of stealing other men’s wives and hauling them on his back. What the male villagers then did was to bulk themselves up in order to be stronger than this wife-stealing hooligan.

Ironing, by itself, is already a rather difficult task – ask every housekeeper who has to do it several days of the week for the rest of their lives. To combine ironing with extreme conditions as a sport? Now, that’s something else. In this sport, participants take their wrinkly clothes and ironing paraphernalia to extreme places such as on top of a cliff, in the middle of the ocean, and underwater, and/or combine it with extreme activities such as surfing and parachuting.

Although the origins of underwater hockey is obviously nowhere near weird, the underwater conditions of this sport, fondly called octopush, contribute to its strangeness. Two great challenges of underwater hockey are to successfully maneuver on the swimming pool floor and to hold breath long enough to maintain possession of the puck until it reaches the end zone.

Cheese rolling is a traditional sport in Gloucester, England. In the annual Cooper’s Hill Cheese Rolling and Wake competition, a 7-pound cheese is made to roll from the top of Cooper’s Hill. Participants then race to follow the cheese to the bottom of the hill. The first to reach the finish line gets to take home the cheese.

Any sport that involves cockroaches is weird in every which way. In Queensland, Australia, residents hold an annual cockroach racing event where several of these creepy crawlers are pitted against one another in pursuit of the finish line.

Apparently, there is a sport that involves making an ugly face, which the Brits termed gurning, in honor of the sour crab apple that makes anyone pull a face. The sport of gurning has a long history that dates back to the late 1200s. In Egremont, Cumbria, the World Gurning Championship is held annually and is participated by males, females, and children.

Fireball patterns its mechanics after the globally loved sport, soccer. What’s weird about soccer, right? Nothing. Fireball, however? Nothing, except that the ball is on fire and the players are barefoot. Fireball originated in Indonesia and is popular with students who often play it to usher in Ramadan.

Hemp Olympics is an annual event in NSW, Australia that involves a series of marijuana-related “sports” such as rolling joints, throwing bongs, and crawling through tunnels of flowering plants while hauling fertilizer. This sport is part of a celebration called Mardi Grass Festival, and no, that is not a typo at all. Every Cheech and Chong protege will surely be thrilled to join this strange sport.

Sheep counting takes the cake in this list of absurd sports around the world. Relatively a young sport, sheep counting originated in Australia in the early 2000s, and an annual event has been held since 2006. In this sport, hundreds of sheep are let loose and contestants are tasked to count the fluffy creatures. Makes you wonder why they didn’t make it a race of who falls asleep first.