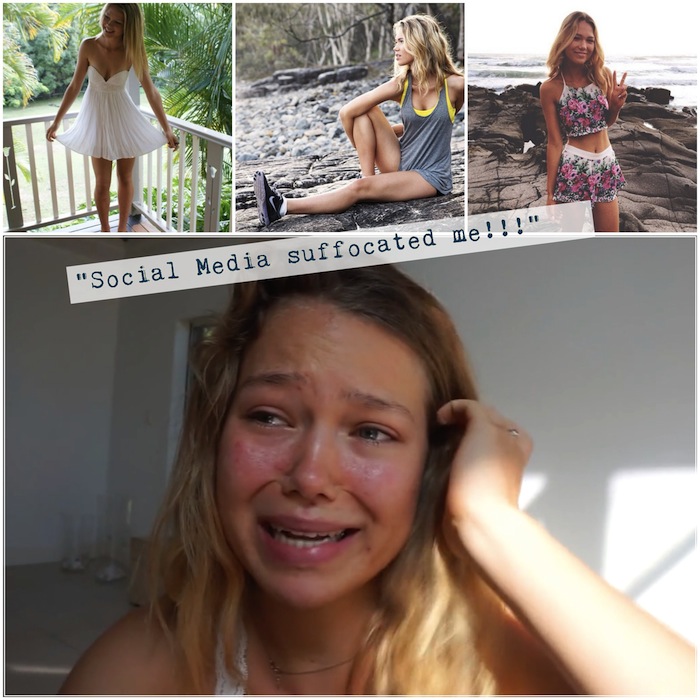 Early this week, more than half a million people across the Internet sphere were shocked when Australian Instagram celebrity Essena O’Neill declared – with the most dramatic flair – that she is done with social media. Essena O’Neill has been a famous social media figure – 600,000+ Instagram followers and 250,000+ Youtube subscribers – since she was 12 years old. She has gained a name for being a #fitspo, #vegan, a pretty young thing with perfect skin, perfect body, perfect teeth, with the most amazing caption to match every perfect picture. All that perfection, however, she said was staged, contrived, and a mere distortion of reality. Before she deleted her Instagram account less than 24 hours ago, O’Neill deleted more than 2,000 photos which she believed served no purpose but that of vanity and edited the captions on some of her most liked posts. She exposed the real story behind the images, most of which were paid product endorsements. She claimed that the pictures were staged and manipulated to show off the best of her features in the most “natural” way. Within 48 hours of her brave declaration, fans from all over the globe expressed their admiration and support to the cause of the18-year-old Internet model. Naturally, fans, especially teenaged girls, saw O’Neill’s decision as a heroic and inspiring gesture that motivates them to live a more authentic life and to stop getting validation from the number of likes and followers.

It was all praises and applauses until she posted a 17-minute video on her new website, letsbegamechangers.com/essenaoneillcom, where she talked to her audiences about the challenges she faces now that she has stopped making money from her Instagram posts, where she told her new and old followers to help her pay for her newfound “real-life” lifestyle. She said that without her product endorsements, it is impossible for her to pay her rent and life essentials.  The video, which she has now deleted from her website, has people calling her a self-entitled, lazy young girl and has people questioning if all the drama about turning her back on social media were actually just another social marketing effort. On the “Support Me” section of her website, she said she would need some support from her fans, “I’m not a purist. I need money to cover the basics. If you get something from what I’m doing, pay what it’s worth to you.”

Click “NEXT PAGE” to read the rest of the story ⇒⇒⇒

On her new website, Essena Oneill talks about the stories behind some of her most liked photos, such as the one below. This one was taken on her 15th birthday with the sole purpose of uploading a hot picture of herself as a Facebook profile photo, which she hoped would make her popular.

Before she migrated to her new website, Essena aimed – or at least appeared to aim – at educating the youth about social media’s lack of authenticity, about how most of what is seen on social media is a product of genius social marketing such as this seemingly harmless and candid photo of her in between sips of orange juice.

Essena believed that contrary to what most people would think, her Instagram posts were not a product of her confidence, but are actually a product of her insecurities and need for social approval. She tricked herself into thinking that she was a body/fitness inspiration, but she was actually feeding on young girls’ insecurities and promoting a twisted sense of body image.

She claimed that she herself was a victim of unhealthy body perceptions and that at age 15, she had already developed unhealthy exercise and food habits just to achieve that socially-accepted, hot physique. She aims to tell everything about her “hot body” pictures on her new website.

More about Essena Oneill on the NEXT PAGE ⇒⇒⇒

The photo below was among the last ones she posted on Instagram before she had her great epiphany. As can be seen on the edited captions on her Instagram photos, her new website would be dwelling on embracing real beauty, developing a healthy body image, and living an authentic life, all of which she claims, are amiss from social media life.

Essena Oneill has plenty of wonderful things to say about living an authentic life, that’s for sure, but whether it is great epiphany or a clever way to transition into a more lucrative niche, many people would definitely be sticking around to find out.