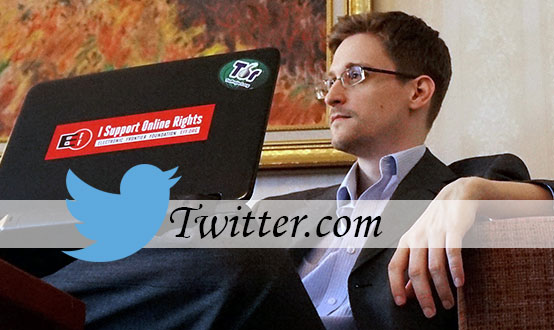 Twitter’s representative confirmed that they have given the twitter handle @snowden to Edward Snowden. The Twitter verified the account within 8 hours. The account boasts more than one million followers in less than 24 hours after coming into existence.

So the account was setup. Mr. Snowden acquired his desired handle; Twitter verified it, the whole world followed – all very surreal but that’s not it. What Snowden did after creating the account, is where it gets really interesting!

Guess who is Snowden following?

Only one account so far and that is NSA!

The first Tweet Snowden made was “Can you hear me now?” – It was Retweeted by thousands.

After making his mark Snowden got into his usual humorous mood and in reply to the astrophysicist Neil deGrasse Tyson he tweeted “Thanks for the welcome. And now we’ve got water on Mars! Do you think they check passports at the border? Asking for a friend.” There was a bit of “hero traitor” discussion afterwards.

After taking Twitter and media with the frenzy, Snowden signed off with another piercing Tweet that said, “Meanwhile, a thousand people at Fort Meade just opened Twitter.”

Edward Snowden is currently believed to be in Moscow, Russia. Some people call him traitor while others say he is a warrior fighting for civil liberties.

It is worth mentioning here that Edward Snowden has criticized social media sites like Google and Facebook to be “in on the illegal surveillance NSA is doing on American people.”