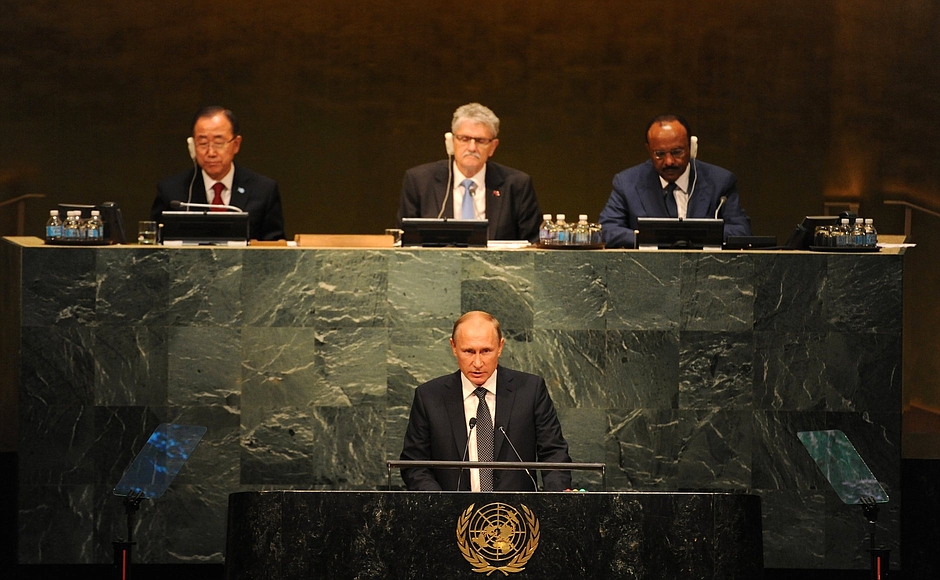 It was a huge day at UN General Assembly in New York. It was tense, overwhelming and at times funny. Barack Obama and Vladmir Putin made speeches. They attacked each other through veiled references and at times, even directly.

The main agenda of both speeches was the harrowing conflict in Syria. The two countries, US and Russia stand at cross roads and both have conflicting policies regarding Syria.

Obama’s not so thinly veiled ‘warning’ said, “The strongmen of today, become the spark of revolution tomorrow. I believe a government that suppresses peaceful dissent is not showing its strength; it is showing weakness and it is showing fear.”

He described al-Assad as “a dictator who slaughters tens of thousands of his own people.”

In contrast, Putin said that Assad is a Syrian hero and we should acknowledge his contributions that are great and praise-worthy. He further added, “no one but President Assad’s armed forces (and Kurdish) militia are truly fighting the Islamic State.”

However when speaking of ISIS, both leaders agreed that a grand unified alliance against the ISIS threats is the solution. Obama praised the efforts of coalition forces that are fighting against the “inhuman” ISIS. Putin declared that there should be a “genuinely broad alliance against terrorism, just like the one against Hitler.”

Obama’s speech was more about idealistic approach rather than policies, while Putin bashed US’s role in conflicts in Middle East.

Both leaders tried to look co-operative and ready for dialogues but it was evident that they are stilling at arm’s length. They both have conflicting opinion over Assad. US wants Assad to go while Putin says Assad’s regime is crucial to find militant threats like ISIS.