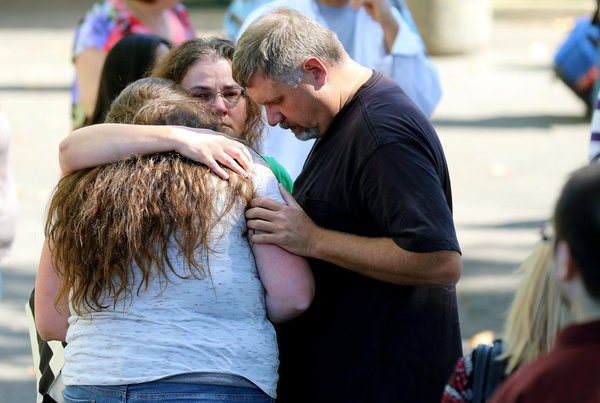 This has been a year filled with mass shootings. These shootings have led to some serious calls for gun control.

While this is not a comprehensive list, here are some of the most talked about mass shooting around the world this year.

Warning: The following images and statements concerning these shootings are graphic. They may upset people.

January 7, 2015 – Two gunmen attacked a satirical magazine, Charlie Hebdo. They kill 12 people, including police officers and several magazine staff members. The gunmen later turned themselves into law enforcement. Al Qaeda claimed responsibility for the attack, citing the magazine publish a caricature of the Prophet Muhammad as the reason for the attack.

February 14, 2015 – Omar Abdel Hamid first began shooting at a free speech forum at a cafe where a cartoonist was speaking. Hamid then went on to commit a second attack outside of a synagogue. Two civilians were killed and five police officers were wounded. Police later located and killed Hamid during a fire fight.

March 18, 2015 – 22 victims, including foreign tourists, were killed while visiting the National Bardo Museum. The gunmen started shooting into the crowd outside, but followed those fleaing into the museum continuing to fire. While two gunmen were killed during the attack and one more killed later in a raid. It is thought that two or three more shooters escaped.

April 2, 2015 – Militants with al-Shabab targeted Christians and other non-Muslims in a violent attack at the University. 147 people, mostly students and two security guards, were taken hostage and killed. Four of the militants committed suicide by suicide vest in the dormitories. One more was arrested.

June 17, 2015 – Dylann Roof sat in the Church for a time before opening fire on other church attendees. He escaped the scene, but was arrested a day later. He killed nine people, including a state senator and the church pastor.

June 26, 2015 – Seifeddine Rezgui fired into the resort beach area. He killed 38 people, mostly British tourists. He continued the attack in a reception hall, in the street, a neighborhood, and from a rooftop. Rezgui was killed by police in an exchange of gunfire.

July 23, 2015 – John Russel Houser fired into a showing of the film, Trainwreck, at a Lafayette movie theater. He injured nine and killed two people. He turned the gun on himself.

October 1, 2015 – Chris Harper Mercer fired at fellow students in Snyder Hall on the campus of Umpqua Community College in Roseburg, Oregon. Mercer killed ten people and injured seven more before being killed during an exchange of fire with police.

November 13, 2015 – In three coordinated attacks by ISIS, 129 people were killed and hundreds more were injured. The targets included a concert hall, many street restaurants and cafes, and a soccer stadium. Several of the terrorists were killed during the attacks.

November 20, 2015 – A former al-Qaeda commander, Moktar Belmoktar, led a group of extremists in an attack in a Mali hotel. Over 150 people were taken hostage by the group, 27 were killed. Several extremists were killed in the attack.

November 27, 2015 – Robert L. Dear attacked a planned parenthood clinic in Colorado Springs, claiming to act on behalf of “the babies.” Dear killed three people, including a police officer, and wounded nine others. Dear was arrested.

December 2, 2015 – Syed Rizwan Farook and Tashfeen Malik open fired at a holiday party in a social services center. The facility serves those with disabilities and special needs. Farook and Malik killed 14 people and wounded 22 before they were killed in a shootout with law enforcement. Farook and Malik were married.

These shootings were horrible. What do you think should be the response to any such shooting?