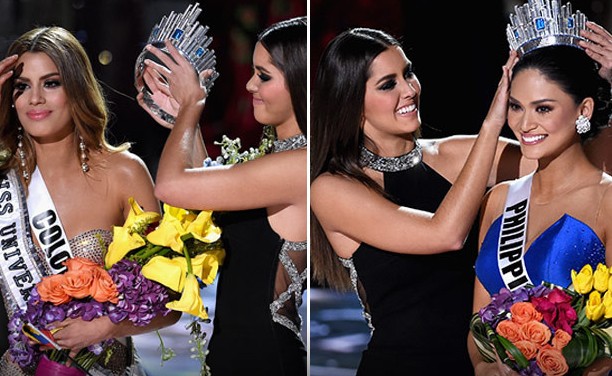 Miss Universe Philippines Pia Alonzo Wurtzbach was standing next to Miss Universe USA Olivia Jordan when Harvey started making his correction. Shocked, Wurtzbach made her way to center stage and stood next to Gutierrez-Arévalo. The crown and sash were removed from Miss Columbia and placed on Miss Philippines.

Harvey held the card up for the cameras to prove that he had made a mistake. He apologized during the event and on Twitter.

I'd like to apologize wholeheartedly to Miss Colombia & Miss Philippines for my huge mistake. I feel terrible.

Secondly, I'd like to apologize to the viewers at that I disappointed as well. Again it was an honest mistake.

I don't want to take away from this amazing night and pageant. As well as the wonderful contestants. They were all amazing.

Miss Columbia tearfully thanked everyone who supported her after the event.

What do you think should have happened?